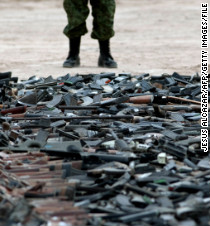 (CNN)Mexico is home to world-class museums, archaeological sites and cultural events — but in the past decade, drug cartel violence is often the first thing that comes to mind. The illegal drug trade has had an enormous cost on Mexico in lives lost.

Here are some statistics to put the drug war in context:

Killings in Mexico are trending up after a decline

The number of homicides in Mexico peaked in 2011 and then declined for three years. But the latest statistics show the trend reversed in 2015. Estimating how many homicides are related to drug violence is an imprecise science, but leading newspapers in Mexico estimate that since 2006, organized crime-style homicides account for 40% to 50%.

Mexico is NOT the deadliest country in the Americas

The grisliness of some of the drug cartel violence in Mexico — beheadings, mass killings, torture — gets a lot of attention. While there are some hot spots of violent activity, Mexico’s homicide rate is actually closer to the middle of the pack than the top, compared with other nations in the hemisphere.

Many kingpins have fallen, but the smuggling industry survives

The Mexican government points to evidence of its successes in the war on drugs: The leadership of the biggest cartels has been captured or killed (or recaptured, as in the case of serial escapee Joaquin “El Chapo” Guzman). Critics of the so-called “kingpin strategy” say the focus on the bosses has only created more factions of traffickers.

The United States is the biggest market for Mexican drug cartels. The conversation on drugs has evolved in the past 15 years to include legalization of marijuana, the toll of innocent victims in Mexico, and the amount of money earmarked for fighting the drug war. But while the demand for drugs fluctuates (one indicator is how many drugs are seized at U.S. ports of entry), it hasn’t changed too much.

U.S. authorities estimate that the Mexican drug cartels send between $19 billion and $29 billion back to Mexico from the United States, according to the Department of Justice. Authorities successfully seize millions of dollars each year that are being smuggled back south to Mexico from the United States. Still, it is a fraction of the estimated profits for the cartels.

Zappos Deal of the Day