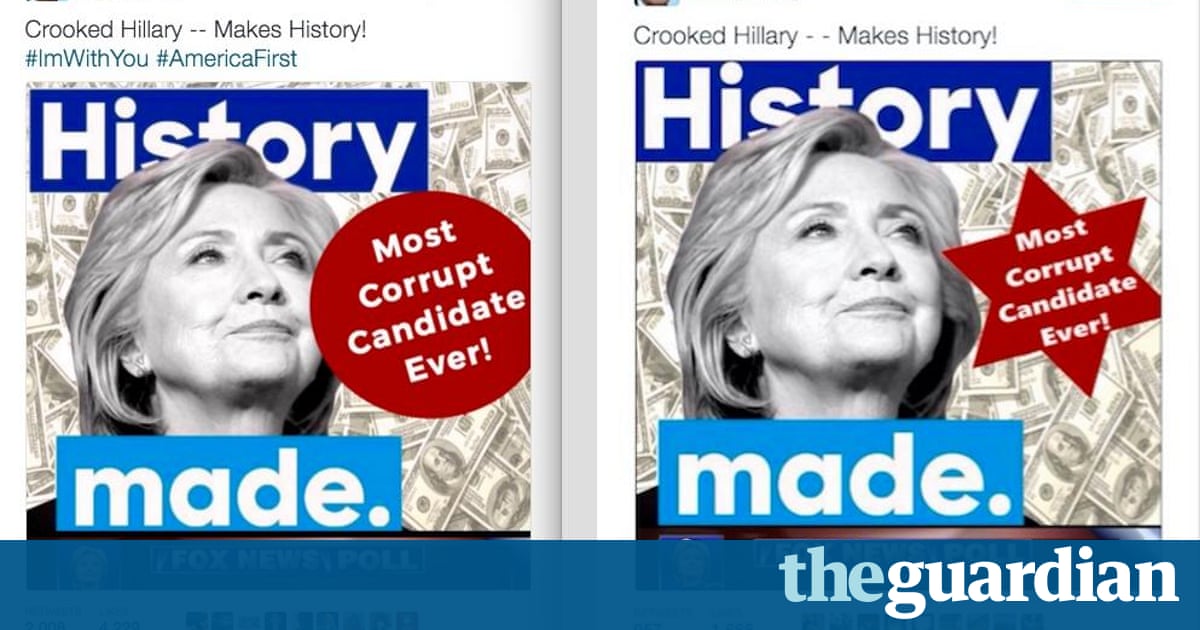 Donald Trump deleted an image of Hillary Clinton and a six-pointed star from social media, following accusations of antisemitism on Saturday given the stars placement over an image of money and his repetition of the controversial phrase America first.

The original graphic, which depicted the Democratic presumptive nominee over a pile of money, contained the text most corrupt candidate ever in a six-sided star, reminiscent of the Jewish star of David.

Almost four hours later, Trump tweeted out a second image, with the text inside a circle instead of a star, though the stars points were still visible on the edge of the circle. The Trump campaign did not immediately respond to a request for comment.

Moments after the first image was published, commenters accused Trump of stoking antisemitism with offensive imagery.

Clintons national spokesman Josh Schwerin quickly noted the imagery, asking: Why is there a Star of David?

Her economic policy adviser Michael Shapiro was more explicit with his criticism, writing: This new divisive dogwhistle isnt [a] surprise.

Unlike the original graphic, the updated image contained the text America First, a phrase the Anti-Defamation League has previously asked Trump to stop using because of antisemitic connotations. The phrase gained currency in the 1930s with Americans who wanted the US to avoid involvement in the second world war; most prominent among them was Charles Lindbergh. The American pilot was welcomed in Nazi Germany several times before the war and in 1939 wrote that racial strength is vital.

Our civilization depends, he wrote in Readers Digest, on a Western wall of race and arms which can hold back either a Genghis Khan or the infiltration of inferior blood.

Lindbergh largely led the America First movement in the months before the war, advocating for neutrality. In its plea to Trump, the ADL described Lindbergh as a man who sympathized with the Nazis and whose rhetoric was characterized by anti-Semitism and offensive stereotypes.

The ADL has also given $56,000 that it received from Trump and his foundation to anti-bias and anti-bullying education programs.

The star of Davidhas been used in as a symbol for Judaism in Europe since at least the 14th century, and Adolf Hitlers Third Reich used the symbol to identify Jews during the Holocaust. In 1948 it was adopted onto the flag of new nation of Israel.

The Clinton campaign did not immediately respond to a request for comment on Trumps graphic or language or the ADLs petition.

Zappos Deal of the Day